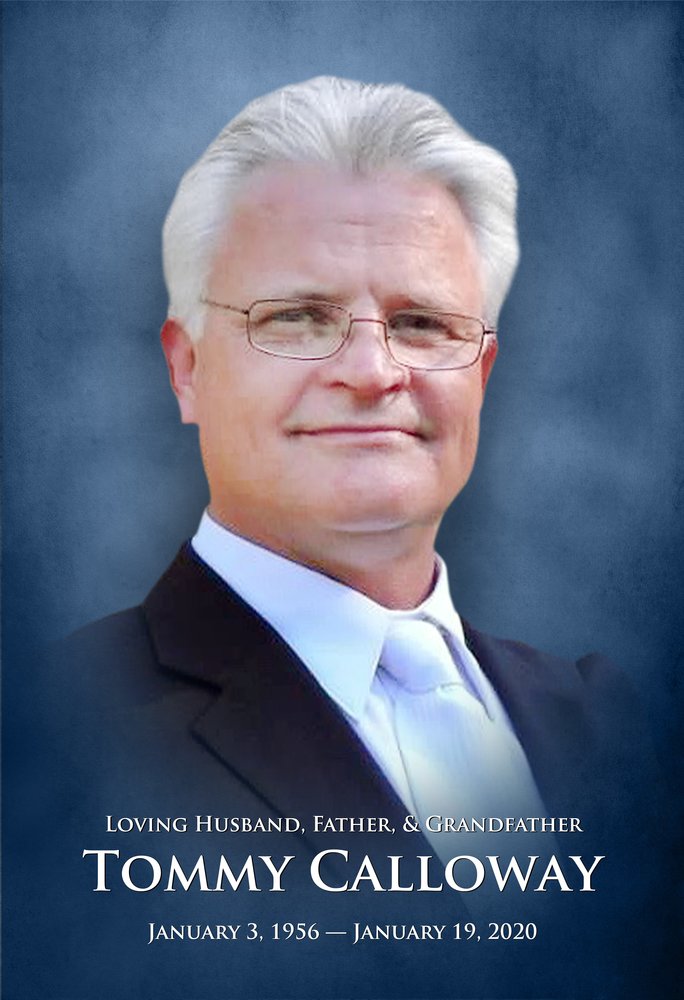 Andrew Thomas (Tommy) Calloway, loving husband and father passed away after a long battle with cancer in the comfort of his own home in Locust Grove, Georgia, surrounded by family and friends, on Sunday, January 19, at the age of 64. Tommy was born in East Point, Georgia on Tuesday, January 3, 1956, to William Hollis and Nellie Mae Callaway. He was raised in Morrow by his sister Mary and late brother-in-law, Jerry Bridges. He married his childhood sweetheart Cheryl Franklin on January 2, 1973, and had two children, Sandy and Thomas. He then married Cindy Martin on August 17, 1985, and had two children, Christin, and Kenneth. Tommy later married his soulmate, Sharon Johnson on February 17, 2007. Tommy was a master tile setter and owner of Custom Tile and Construction for over 40 years. He was trained by his brother, James, and passed the family trade on to his two sons, Thomas and Kenneth. He was inventive and enjoyed creating and building. Tommy was a devout Christian and was known for being loving, kind, and generous. He was always willing to lend a helping hand to anyone that needed it. Tommy loved to go fishing and camping whenever he had the time and spending time with his children and grandchildren whenever he could. He also had a special place for his dogs and all animals in his heart. He is survived by his wife, Sharon Johnson-Calloway; his four children, Sandy (Patrick) Calloway, Thomas (Kim) Calloway, Christin and Kenneth Calloway; his three step-children Charles (Vicki) Johnson, Chris (Teena) Johnson, Ruby (Jeffery) Thompson; 10 grandchildren; his brother, James Henson; his sister, Mary Bridges; and many nieces and nephews. He is preceded in death by his brother, William Hollis “Junior” Callaway, Jr. Tommy will be remembered at Hampton Heights Fellowship on Dorsey Rd/Hwy 20 with a viewing on Tuesday, January 21, 2020, from 4:00 P.M. to 8:00 P.M. and a funeral service on Wednesday, January 22, 2020, at 12:00 NOON with Pastor Steve Worley and Bishop L.R. Dunigan officiating. Burial will be at the Jackson City Cemetery at 2:30 P.M. Those who wish may sign the online guest registry at www.sherrell-westburyfuneralhome.com Sherrell-Westbury Funeral Home, 212 East College Street Jackson, GA is serving the Calloway family.
To send flowers to the family of Tommy Calloway, please visit Tribute Store
Tuesday
21
January