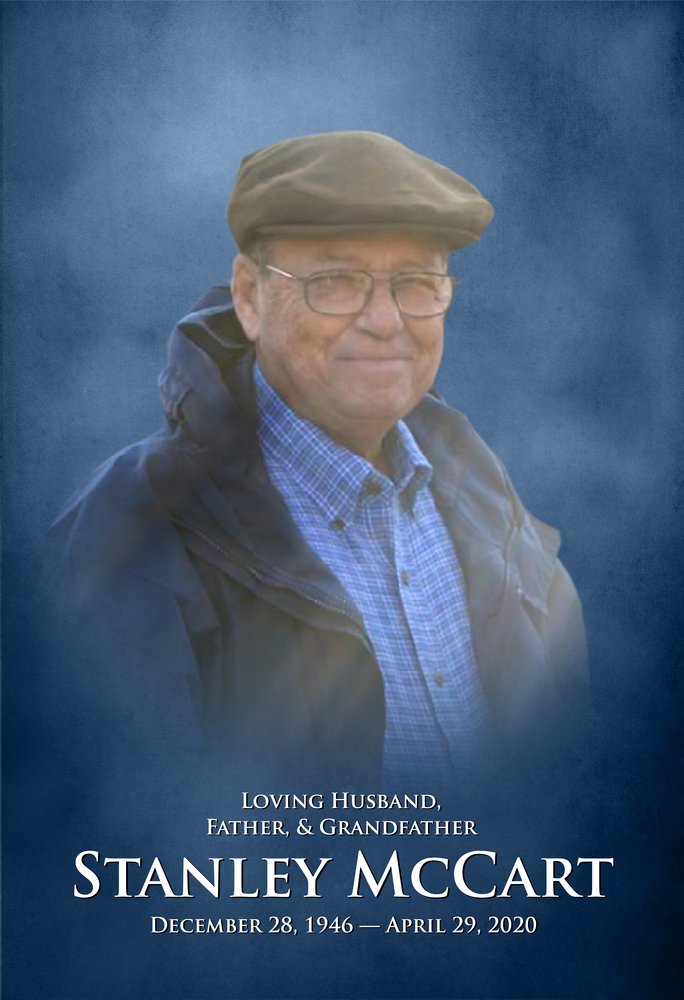 Mr. Stanley Anderson McCart, age 73, of Jackson, Georgia, passed away Wednesday, April 29, 2020, at Atlanta VA Medical Center. He was born on Saturday, December 28, 1946, in Griffin, Georgia, son of the late William Anderson McCart and the late Eunice Piper McCart. Stanley was a member of Macedonia Baptist Church. He was a proud Veteran of the United States Army, having served in the Vietnam War. Stanley was also highly active in the Masons, having been a member of Ancient York Lodge #127 in Worthville, was a former Worshipful Master, and recently received his 50-year pin. He was an ordained Deacon at Worthville Baptist Church and a former Sunday school director. Stanley is survived by wife of 52 years, Susan Washington McCart; sons and daughters-in-law, Mike and Angela McCart, Matt and Emily McCart; grandchildren, Madison, Ellie, Gavin, Kayle, Riley, Kynley; brothers and sisters-in-law, Stacy McCart, Steve and Pam McCart, Sammy and Susan McCart; sisters, Barbara Patterson, and Renee McCart; several nieces and nephews. A graveside service for Mr. Stanley McCart will be held on Saturday, May 2, 2020, at 2:00 P.M. at Worthville Baptist Church with Dr. Lane Sanders officiating. Due to the COVID-19 pandemic, the family has requested those attending to maintain social distancing and to wear gloves and a mask if possible. Flowers will be accepted, however, those desiring may make a contribution to Macedonia Baptist Church - Revive the Vision Building Fund, 151 Macedonia Church Road Jackson, Georgia, 30233 in memory of Mr. Stanley McCart. Friends may stop by the funeral home Friday afternoon from 2:00 P.M. until 6:00 P.M. for the viewing. Those who wish may sign the online guest registry at www.sherrell-westburyfuneralhome.com Sherrell-Westbury Funeral Home, 212 East College Street Jackson, GA is serving the McCart family.
To plant a tree in memory of Stanley McCart, please visit Tribute Store
Services for Stanley McCart
There are no events scheduled. You can still show your support by planting a tree in memory of Stanley McCart.
Visit the Tribute Store
Share Your Memory of
Stanley
Upload Your Memory View All Memories
Be the first to upload a memory!
Share A Memory
Plant a Tree